Sports Heros with Food Allergies...What More Could a Mother Ask For? 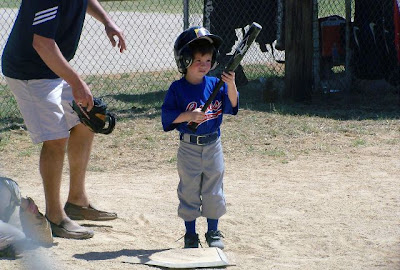 Early into the discovery of my son's food issues I had all kinds of feelings going on. I was thrilled that diet made such a drastic relief in his autism and gi issues. Uncovering his food allergies and changing our diet, while not easy at first, was a huge blessing for us. Like any mother though, I had to wonder if this would make him feel left out or different than everyone else. I remember looking at what celiac and food allergy teenagers had posted on various message boards. The children whose families embraced the food issues and, for the most part, made an effort to incorporate the dietary needs into family meals, seemed well adjusted. The children whose families kept the meals separate seemed to feel quite lonely, and not just at mealtime but in general as well. My in laws, at the time, were trying to make things as difficult for us as they could.  I think part of that was the stigma they associated with it all. I was worried about how this would impact my son, but as time went on they adjusted as well. At Easter, little cousins wanted toys in their filled eggs just like Gordon's (proving that maybe it's the adults that want the candy in the eggs more than the kids). Last Valentines Day one in law even brought gluten-free cupcakes to his class party. Life, even though it's gluten-free and loaded with a few other food issues, is still as typical as it can be for my son.

Every year our school has an open house night the week before school starts. Students and parents get to visit the child's future class and meet the new teacher. This time, after visiting my son's class, he wanted to see his old kindergarten room. I assumed it was to say "hi" to his old teacher. He actually wanted to meet the new kindergartner with food allergies. He had heard there would be another little boy with food allergies and it was very important to meet him. It dawned on me that he needed to know he wasn't singled out (I have food issues too, but that's not enough).

I was excited to find this article in Baseball Nation called "Food Allergies: BSOHL Of The Future?", about three baseball players recently diagnosed with food allergies. Little boys tend to idolize sports stars, my husband loves to watch sports and big family get-togethers usually wind up with the men sitting in front of some sort of sport game yelling at the t.v.. So the idea that some of these players can't have some of the same foods he can't has this mom cheering.
Posted by Mrs. Ed at 7:20 AM 2 comments: 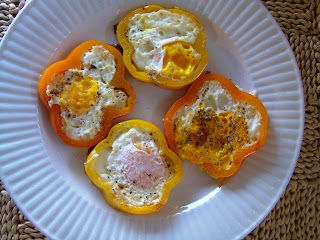 This egg dish has been floating around the internet for awhile and I finally tried it.

The ingredients are obvious: eggs, bell pepper rings sliced about 1/3" thick (yellow, orange, and red bell peppers are much milder than green), a little fat for frying, salt and peper. I cooked the pepper rings for about 2 minutes per side before adding an egg to each one.


Here's the recipes from around the web:

Fried Eggs in a Bell Pepper Ring from Food Renegade

Bell Peppered Eggs from Back to Her Roots

Bell Pepper Egg-In-A-Hole from Shutterbean (Use SCD legal toast)
Posted by Mrs. Ed at 6:35 AM No comments:

Valentines day is suppose to be for lovers, but to doctors it's business as usual. Gordon and I had our bi-annual appointment today with our gi doctor. It was a routine check-up and we were seen by a newer nurse practitioner. When she asked how I was doing I told her about my slight gluten-ization at Thanksgiving that had thrown me off a bit. I suspect it made me more susceptible to a cold and possibly the bout of food poisoning. I've finally had my energy level back to normal the past couple of weeks and have been trying to catch-up on everything. I've just been very burpy and such (not sexy, I know). She asked if I was taking a probiotic (nice surprise), and I said yes. I told her about my history with the SCD. I had been able to add a few non-SCD things back to my diet for awhile, but I'm thinking I might need to just eat strict SCD for a bit and see if it helps. She didn't bat an eye and said to at least give it a try for a month. I couldn't believe the SCD was being discussed in a mainstream gi doctors practice! The coincidence...it was Dr. Sidney V. Haas who developed the SCD diet and was convinced the wrong bacteria feed on certain carbs to cause gi symptoms. The "V" stands for "Valentine" as he was born on February 14, 1870.
Posted by Mrs. Ed at 5:43 PM 4 comments:

There are two different TED talks here that I found very interesting. Both talks are fascinating and easy to understand. TED talks have a short format, under 18 minutes I believe.

The first one is from Stephan Guyenet on "The American Diet: a Historical Perspective". He discusses the different composition of diet today versus about a hundred years ago. There has been enough of a change to raise a few eyebrows. Stephan also has a blog Whole Health Source.


The second TED talk is from Bonnie Bassler on "How Bacteria Talk" (just scroll down to the little TED screen). Ms. Bessler is a microbial geneticist at Princeton University.  In the late 1990's she was studying the glowing bacteria in angler fish (if you've seen Finding Nemo, this is the monster fish with the "pretty light"). She tried to figure out how they all knew to glow at the same time. Up till then, for the most part, bacteria were not considered intelligent enough to communicate with each other. She discovered that not only do they communicate, they are multi-lingual. The have an intra-species language and a sort of universal language that most bacteria seem to understand.
Posted by Mrs. Ed at 8:30 AM 1 comment: