I love roasted Brussels sprouts, but despise the boiled ones. I didn't feel like firing up the oven to roast them, plus I was in a hurry, so I chopped and pan fried them. Very easy, quick and good. In fact so easy this really isn't a recipe at all, but I'll shamelessly post it anyways:

Cut the brown part of the stem part off the sprouts. Chop sprouts into quarters. In a frying pan over medium high heat, melt butter if you are using butter (for GFCF use another type of fat or oil). Add sprouts and cook until some are lightly browned and heated to your preference. Salt to taste.
Posted by Mrs. Ed at 1:24 PM 2 comments:

He's a fascinating article on the importance of gut flora: Human nutrition, the gut microbiome and the immune system. I saw a link to this gem on Paul Whiteley's blog Feed Me Research. It's been said they you can't fully discuss nutrition without the role of the gut flora. This article discusses some of the nuts and bolts of this, and for the most part it is easy to follow for us laypersons. The article makes several points worth mentioning:

"During the past 30 or so years, the North American diet has also shifted in terms of the relative contributions of different foods to total energy intake. Since 1970, two dietary 'epochs' can be distinguished based on the contribution of grains to overall calories (the mean increase in daily carbohydrate intake for men and women during this period was 62.4 g and 67.7 g, respectively). The consumption of other food items has also changed: Spearman's rank correlations between food availability and time, followed by adjustments of P values to reflect false discovery rates, show that the representation of 177 out of 214 items tracked by the USDA has increased or decreased significantly in US diets since 1970. For example, Americans now eat less beef and more chicken, and corn-derived sweeteners have increased at the expense of cane and beet sugars. Furthermore, methods of food modification and preparation have changed."

I find this interesting because chronic autoimmune and digestive diseases are on the rise. As a SCD'er I can't help but wonder if the drastic uptake of grains and sugar are a factor. A fun look at this change can be seen by Tom Naughton here and here.

"The intestinal microbiota can synthesize several vitamins involved in myriad aspects of microbial and host metabolism, including cobalamin (vitamin B12), pyridoxal phosphate (the active form of vitamin B6), which is involved in several enzymatic interconversions in amino-acid metabolism, pantothenic acid (vitamin B5), niacin (vitamin B3), biotin, tetrahydrofolate and vitamin K. In addition to vitamin B12, gut microbes produce a range of related molecules (corrinoids) with altered 'lower ligands', including analogues such as methyladenine and p-cresol. More than 80% of non-absorbed dietary vitamin B12 is converted to these alternative corrinoids. There is preliminary evidence to suggest that syntrophic relationships among members of the human microbiota, and the fitness of some taxa, may be based on the ability to generate, use or further transform various corrinoids."

I found this one interesting because those of us with gi issues also tend to be lacking in these vitamins. Vitamin B6 has also been found to help in autism, again pointing to a possible gut issue. As well as anemia in both populations:

"Likewise, iron is an essential micronutrient for bacteria. Given the low solubility of Fe3+, microbes have evolved the capacity to produce several high-affinity iron-binding siderophores. Microbes take up soluble Fe3+–siderophore complexes by several active transporters. Early studies in gnotobiotic animals showed a link between the gut microbiota and the development of iron deficiency. Germ-free but not conventionally raised rats become anaemic when fed a low-iron diet. The germ-free rats also show increased loss of iron in their faeces compared with their conventionally raised counterparts54. The iron balance that exists between host and microbiota is disturbed in a mouse model of Crohn's disease in which tumour-necrosis factor-α (TNF-α) expression is dysregulated: oral (but not parenteral) iron supplementation in these animals causes a shift in the gut microbial community composition, as defined by 16S ribosomal-RNA-based surveys, and exacerbates their ileitis."

This article also discusses the role of gut flora in obesity and diabetes. I was curious about which type of fat they used in this study reference: "Mice fed a high-fat diet have increased serum levels of lipopolysaccharide".
It turns out the researchers used corn and lard for the 72 percent fat diet for the mice. (I suspect a lot of corn and corn oil in the modern diet may not be a good thing).
Posted by Mrs. Ed at 6:17 AM No comments:

We have an abundance of sweet onions in our CSA box. Thankfully I have a food dehydrator. I also slipped some diced onions into the deviled eggs with tasty results.

Slice eggs in half lengthwise and scoop yolk into a small bowl. Add mayonnaise and butter and mash well. If the mixture is too dry, mix in more mayo one teaspoon at a time to desired consistency. Add onions, salt and pepper. Drop yolk mixture into egg white shells. Sprinkle with paprika. Chill until serving.
Posted by Mrs. Ed at 7:18 PM No comments: 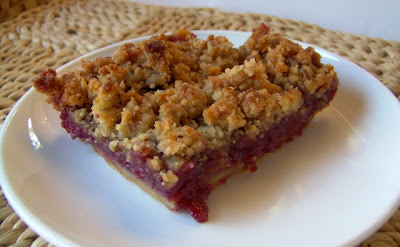 When I saw these Berry Honey Bars (SCD friendly) on Karen's Heal-Balance-Live blog I couldn't wait to try them. She also has a version with chocolate chips (not SCD legal). These were yummy. The crust is a perfect replacement for a graham cracker crust. I did not have any sliced almonds on hand so I used pecans and used butter in place of the coconut oil and they were still delicious.  Thanks Karen!

Raspberry Jam  and many more from SCD Recipes
Posted by Mrs. Ed at 5:25 PM 1 comment:

Study for Those With Crohn's Disease, Ulcerative Colitis, and IBD

This is a super easy study to participate in. Rush University is seeking volunteers for a study on IBD. They currently need controls, which in this case are folks with IBD who are NOT following a special diet. Here is the official release:

Do you have Crohn’s disease, ulcerative colitis or indeterminate
colitis? Would you like to have a free stool analysis to see what
bacteria, yeast and other microbes are in your gastrointestinal tract?

Rush University Medical Center’s Department of Gastroenterology is
conducting a study to determine if the Specific Carbohydrate Diet
changes the population of microbes in the gastrointestinal tract.
This is a popular dietary program amongst patients, but there are no
published studies on how the diet works. Your participation in this
study will contribute to scientific knowledge regarding how diet can
be used to manage the symptoms of inflammatory bowel disease.
Participation will entail completing a series of surveys and mailing
two stool samples and a urine sample. This study can be done
completely from home through the mail and does not require presence at
Rush University Medical Center.

We are currently looking for volunteers 8 years of age or older with a formal
diagnosis of Crohn’s disease, ulcerative colitis or indeterminate
colitis who are NOT on the Specific Carbohydrate Diet or a similar
diet. Subjects must be located in the United States. Volunteers who
qualify for the study will receive a DNA analysis of their stool.

The principal investigator for this study is
Ece Mutlu, MD
Rush University Medical Center Department of Gastroenterology
1725 W. Harrison St., Ste. 207
Chicago, IL 60612
If you are interested in participating or have questions, please contact
(312) 942-3466.
clinical_trials@rush.edu
Posted by Mrs. Ed at 1:42 AM No comments: