Pecanbread...It's Not Just for Kids Anymore

Many of you know that Pecanbread is the SCD website for parents with children on the SCD. We started the SCD for my son in 2008, who has had GI issues since one week of age and regressive autism. Pecanbread has been a godsend for me, especially for kid friendly recipes and trouble shooting ideas. The website is designed for kid issues, however, there is so much valuable information that it is just as useful for grown ups too. If you are following the SCD and have never thought to poke around on it, you may be surprised. They also add new info from time to time. Here's a just a few of their interesting pages:

SCD and Detoxification
Stages (may be helpful for some)
Recipes in stages
Sample Menus
Food Preparation
Common Mistakes
Overcoming Difficulties
Improving Results
Yeast and SCD yeast protocol
Constipation
How to enhance the SCD (although I don't believe between GAPS and SCD one is better in general than the other, it all depends on the individual chemistry, for us starting SCD was the better option)
Probiotics 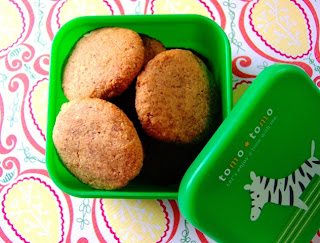 Here's a lunchbox treat that's not too sweet.

In a large bowl combine dry ingredients. In a medium bowl mix wet ingredients together. Pour wet ingredients into dry and stir until combined. Chill in freezer or refrigerator until it can be handled easier (10 to 30 minutes). Roll dough into small balls, about 1/2 inch diameter, the size of a large marble steely, and place on cookie sheet. With wet hands press cookie dough balls flat. Bake 20 to 30 minutes, depending on how crunchy you like your cookies. Makes about 6 or 7 dozen.

These keep well, for about 10 days in an airtight container (we live in a dry climate, so humidity may affect shelf life).

This post is linked to Fightback Fridays.
Posted by Mrs. Ed at 2:54 PM 4 comments:

I haven't abandoned you. We've had a busy spell for awhile which included lots of "to do" things, including getting our broken oven fixed. Even though it's been over 100 degrees everyday, I was still lost without my oven. On the plus side, what better way to enjoy 100 plus temperatures than at Schlitterbaun. Every summer we try to visit good friends in San Antonio and spend a day at a water park. 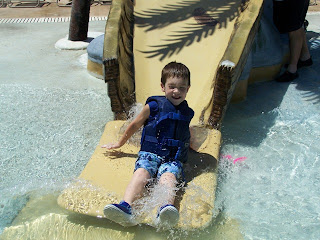 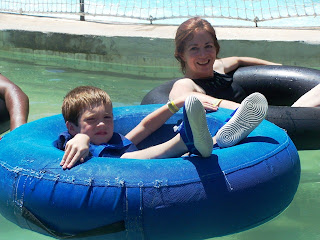 Now this may seem like a typical photo of a family waiting in line (see below). For us it was a really big event. Notice there is no crying or screaming. Our child has never done lines well. Waiting in lines with him was agonizing, he would have a big meltdown. Here, while there was some complaining, he was no worse than his cousin who is the same age. Has he outgrown it or will we have to bring the cousin everywhere we go now? 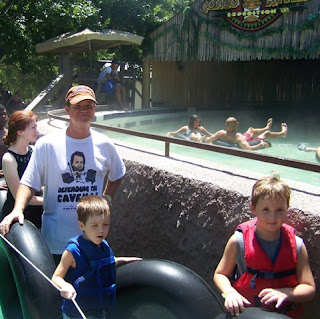 Between Schitterbaun and San Antonio was a Snake Farm which the boys had to see. All the way there they sang "going to the snake farm": 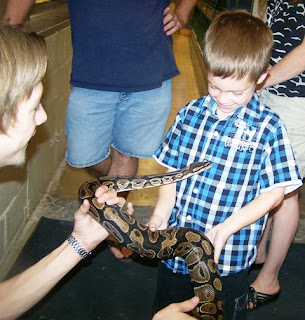 We also ate at our favorite restaurant in San Antonio, Chama Gaucha. It's a Brazilian steakhouse and most of their cuisine is gluten-free. It's amazing.
Posted by Mrs. Ed at 11:42 AM 1 comment: