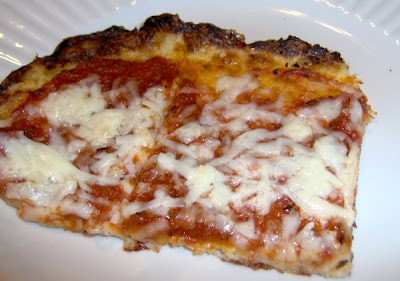 Yes, that's right, a pizza crust made from cauliflower that has a great pizza dough flavor! It's from Your Lighter Side.

I doubled the recipe to fit a whole cookie sheet. Her recipe also calls for Mozzarella Cheese, which is not SCD legal, so I substituted with Alta Dena Goat Cheese for the crust and Romano Cheese for the topping. I steamed fresh cauliflower till fork tender and used a ricer. Instead of immediately ricing it, I first pushed on it just enough to squeeze the water out of it. Then I riced it.

It was a very thin crust pizza with a great flavor. I haven't tried it for breadsticks yet but the photo on her blog sure looks good. 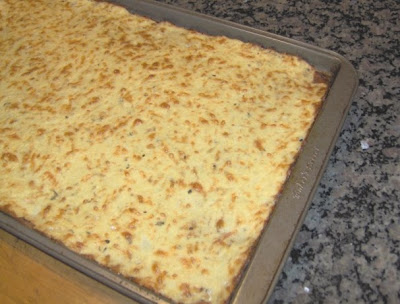 I have found many great recipes from Low Carb cookbooks and blogs. They get real creative with veggies like cauliflower, much like the SCD. The Specific Carbohydrate Diet isn't a low carb diet, we don't count carbs. We just eliminate certain carbs we cannot digest, and some of these are also avoided by low carbers as well, although for different reasons. Low carb recipes are mostly gluten-free too. However, they will still have the occasional recipe with wheat flour so you have to be familiar with your diet before digging in low carb lit for recipes.
Posted by Mrs. Ed at 7:55 PM